I came across this story about gratitude and having respect towards all, regardless of what (or who) you think they might be. 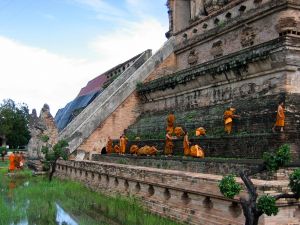 The abbot of a once famous Buddhist monastery that had fallen into decline was deeply troubled. Monks were lax in their practice, novices were leaving and lay supporters deserting to other centers. He traveled far to a sage and recounted his tale of woe, of how much he desired to transform his monastery to the flourishing haven it had been in days of yore. The sage looked him in the eye and said, “The reason your monastery has languished is that the Buddha is living among you in disguise, and you have not honored Him.”

The abbot hurried back, his mind in turmoil.

The Selfless One was at his monastery! Who could He be? Brother Hua?…No, he was full of sloth. Brother Po?…No, he was too dull.

But then the Tathagata was in disguise. What better disguise than sloth or dull-wittedness? He called his monks to him and revealed the sage?s words. They, too, were taken aback and looked at each other with suspicion and awe. Which one of them was the Chosen One? The disguise was perfect. Not knowing who He was they took to treating everyone with the respect due to a Buddha. Their faces started shining with an inner radiance that attracted novices and then lay supporters. In no time at all the monastery far surpassed its previous glory.