Over the weekend I experienced true gratitude in the strictest sense. Just when you think that someone really does not mean anything to you, like a whack to the side of your head, you can see clearly. You understand what you have, you understand what others have. Let me explain what happened just a couple days ago.

I was in an assisted living home visiting my aunt-in-law (is the a term?) this past weekend – I am sure you are familiar with the type of facility. People describe it as “a tough place to visit”; it is always “depressing”, it is “sad” to go there; most people would rather not go unless they had to. I have had my share with both of my parents. This is really  a shame because it implies that the residents who are there are not worthy of attention. This a a topic for a whole other gratitude blog post.

In any case, there I was visiting with family members. The big event of the day was about to start in an hour. There was a buzz going on and the anticipation was building! At 2:00 pm. Bingo was going to start! I have heard about the illustrious bingo game as my Aunt-In-Law was a shark at it! Every visit we would see and hear of the prizes she won at the monthly challenge. I was amazed at how much and how often she won. A couple months earlier, she had won the coveted prize of a Singing Stuffed Teddybear. Squeeze its hand and it sang the  Madona’s song, “Girls just wanna have fun.” Each month, all the residents hoped to get the next coveted singing teddybear prize.

At 10 minutes to 2, we went down to the “Bingo Hall” – the same room where lunch, dinner, and all other activities were held. Being a novice, I approach the room with trepidation  – I was not sure how this whole thing would go down. Each person received 1 card and 1 card only. Along with the card, each person received their own cup of Bingo Chips – an assortment of either plastic chips, or cardboard chips, or poker chips, or some other form of cover for the
Bingo squares.

As the first game started, the caller would call out the numbers. Boxes were covered one by one. My card certainly was not going to be a winner since after about 6 calls, I still had nothing covered! More numbers called – and only a few on my card. At one point a happy winner shouted, Bingo!  The numbers were called back, and sure enough… there was a winner! The prize for this round was a bar of “Beautiful smelling, lotion filled Jergens Soap.” In the true spirit of gamesmanship, we continued playing the same round – no one needed to clear their board! Sure enough – within a couple more calls, 2 people called out Bingo! They received their bar of soap! This continued until EVERYONE was a winner. I now understand how my Aunt-in-law was able to win so much! 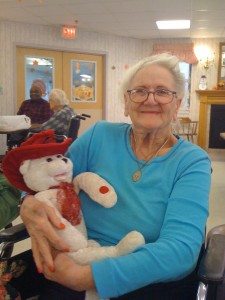 At that point it was time for a door prize! Just like at a wedding, the person who had the word, “WINNER” underneath the bottom of his/her cup of chips won a plastic piggy bank! And the prizes continued coming as we continued to play a couple more rounds of Bingo! And again, everyone won! We all won little bags of candy, and we won some plastic necklaces, and even baseball caps and visors! Ahh the gratitude was flowing!

The next door prize was awarded to the person who had Red, White, and Yellow chips in their cup. I looked at my chips and saw that those were MY chips! I had won the second door prize! I walked up and received a pink duffle bag. I thought it could be used as a small laundry bag perhaps. I was told that there was something inside. I would have to go check it out! I walked back to my seat where I unzipped the bag and realized that I had won the coveted stuffed animal! Squeeze it’s hand and it would  sing the Beatles song, “I Will.”

“Who knows how long I’ve loved you, you know I love you still. Will I wait a lonely lifetime? If you want me to I will.”

At the end of the very last Bingo ‘Speed Round’, all the boards were collected along with the chips. At this point  I gave my prize to my Aunt and asked her to give it to her roommate who so desperately wanted to win the stuffed animal. She rolled her wheelchair over and handed it to her. I may have well given her the keys to a new house, or an expensive car. She started crying tears of joy saying, “This was exactly what I have been trying to get for a year. This is the best thing that has ever happened to me.” She could not believe that I would part with it and that I was giving it to her. She could not express her gratitude more if she tried!

She was so happy and grateful at that moment and I can tell it would last for that day, that week, and that month. I am certain that I have a new friend for life. And it was achieved so easily and effortlessly. When we do things without effort and just flow, amazing things happen. Too often, we try to over-think things and get in our own way. All I did was give someone a stuffed bear. To me it was nothing. To her it was a gift from the heavens.

There are so many ‘lessons’ in this story and this one hour of my life. Which one(s) resonate with you. Please share them by leaving a comment.