This afternoon I met woman so filled with gratitude, she was almost crying. We were in our local supermarket shopping today when I found a big black pocket book sitting on the shelf. Looking around, it did not appear to be that anyone was without one. Oh, what to do, what to do! 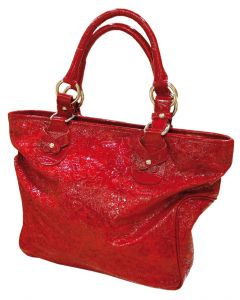 I brought it up to the customer service desk asking if anyone was inquiring about it. I had just missed a woman who was frantically looking for it. Another customer in line said she just went outside. Oh, what to do, what to do.

I started to run outside  searching for a pocket book-less woman. As i was going out, I heard an announcement come over the loud system announcing the pocketbook was found an
d to come to the the Service Desk to claim it. At this point, I am hoping that the store has speakers outside for this woman to hear about her discovered pocketbook. Oh, what to do, what to do.

Sure enough, it was the woman who lost her pocketbook! She was so happy and excited and grateful that her pocketbook was found. She was just about in tears. Although she wanted to offer me some money, I did not accept it. I was happy that I was able to reunite her with her treasures! When I would not accept a reward, I was promised that she would pray for me. That was good enough for me.

As I started to walk away, she reached into her purse and pushed a card into my hand and told me to take it. She was shopping for a Super Bowl party next week and handed me a lottery ticket. I accepted the ticket and expressed my gratitude for it.

I knew the card was a winner. When you do something good, you get rewarded. I had no idea what it would be, but I could feel it. When I scratched off all the spaces, sure enough, I won. Not only did I win, but my amount was doubled. While I won’t be able to retire on this amount, I am grateful for winning.

I feel good that I was able to help someone today.