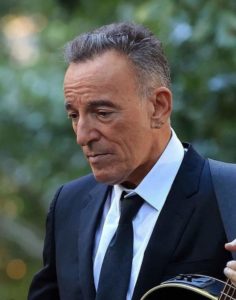 I was driving in the car listening to the radio when a commercial came on for Bruce Springsteen and his band’s upcoming five-night extravaganza at Giants Stadium here in NJ. I started to think of what a rush it must be to play in front of that many people. I checked a few places and found that the Stadium can hold approximately 77,000-80,000 people (depending on the report I read). That is a lot of people!

Of course, to be performing in front of that number of people, some people find it frightening, and others find it amazing. Bruce must feel the latter to be on tour and constantly playing to huge crowds like this. It is no wonder that some ‘Rock Stars’ or ‘Public Figures’, or ‘Entertainers’ get a huge ego after a while. Being the subject of adornment of so many can cause an inflated ego to occur.

The thing that really amazes me is that Bruce is not like that. While I have not met him personally (nor have I ever been to one of his concerts), I have friends who have personally interacted with him. Living in NJ (where Mr. Springsteen lives) and working just minutes from his home residence, my co-workers see him on a regular basis. One woman with whom  I work rides and shows horses at the same horse show that Bruce’s daughter rides. My co-worker describes how Bruce will stand in line at the food truck just like everyone else. Another friend of mine installed the heating unit in one of his barns. When he saw him at a later time (a record signing), he asked him how his heater was doing!

I think that it is great that someone can have so much, and still be a ‘normal’ person. The news is filled with too many celebrities doing silly things because they think they are special. Back in High School, an old girlfriend was crazy about Bruce. I liked his music but was not fanatical about him as she was. As a result, I have been holding a ‘grudge’ for over 20 years. I still have many of his albums, but never had an inkling to go see him. Now that I have thought about him, I think I may be changing my mind!

I am grateful to be able to see things in a different light, especially when they free me up from thoughts that have restricted me in the past!