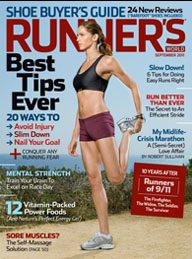 I have a stack of magazines in my office. When I say a stack, I mean a pile that is literally 4.5 feet high sitting on the floor. I decided that it was time to take action and eliminate some of them from the pile. You see, this pile is a collection of periodicals that I have already read, or want to read. It is a collection of various sports magazines, technical mags, photography magazines, and travel/scuba diving magazines. Many of these I ‘think’ will be use for reference later on.

Since my doctors have told me I should not run anymore due to a bad knee, I decided that I need not keep all the Running magazines I have. I had visions of bundling them up and putting them out on Recycling day. To me, however, that would be a waste. Instead, I packed them up (over a year’s worth) and brought them to work. The first person that I thought of… I went up to bring them to her. Initially, she was not at her desk, so I thought I would leave them there and surprise her. But then something told me, “Go into the Kitchen area” – sure enough there she was! I gave her the magazines and she was VERY happy to receive them!

It made me feel good to know that someone else was gaining a lot of benefit from the information, and I felt good giving the magazines away. Is there something that you can give away to help someone else out? It is a great feeling.