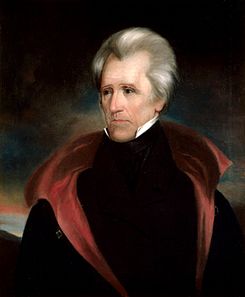 In 1781 Andrew Jackson, then 14 years of age, enlisted in the American army, was captured (along with his brother) and they were both thrown into prison where Andrew Jackson contracted smallpox. His mother Elizabeth Hutchinson Jackson, through exchange arranged for his release; Elizabeth arranged a prisoner transfer – the patriots turned over thirteen redcoats and the British freed seven prisoners, including the two Jacksons. Elizabeth then nursed Andrew back to health.

Responding to an urgent appeal, she left him to go to Charleston to nurse some sick neighbors who were confined there on a British hospital ship. This errand of mercy cost her life at a young age of only 41.

She caught yellow fever and died.

Almost her last words to her young son were:

“Andrew, if I should not see you again, I wish you to remember and treasure up some things I have already said to you; in this world, you will have to make your own way. To do that you must have friends. You can make friends by being honest and you can keep them by being steadfast. You must keep in mind that friends worth having will, in the long run, expect as much from you as they give to you.

To forget an obligation or to be ungrateful for a kindness is a base crime – not merely a fault or a sin but an actual crime. Men guilty of it sooner or later must suffer the penalty.

In personal conduct, be always polite but never obsequious. None will respect you more than you respect yourself.

Avoid quarrels as long as you can without yielding to imposition. But sustain your manhood always. Never bring a suit in law for assault and battery or for defamation. The law offers no remedy for such outrages that can satisfy the feelings of a true man.

Never wound the feelings of others. Never brook wanton outrage upon your own feelings. If ever you have to vindicate your feelings or defend your honor, do it calmly. If angry at first, wait till your wrath cools before you proceed.”

Good Advice all around!