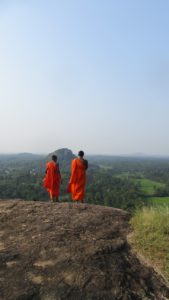 Two monks were returning to the monastery in the evening. It had rained and there were puddles of water on the road sides.

At one place a beautiful young woman was standing unable to walk across because of a puddle of water. The elder of the two monks went up to a her lifted her in his alms and left her on the other side of the road, and continued his way to the monastery.

In the evening the younger monk came to the elder monk and said, “Sir, as monks, we cannot touch a woman ?”

Then the younger monk asks again, ” but then Sir, how is that you lifted that woman on the roadside ?”

The elder monk smiled at him and told him ” I left her on the other side of the road, but you are still carrying her ”

Posted in Gratitude and tagged Monks