I was thinking about gratitude today (does that surprise you?) as I was going through some old issues of BusinessWeek. I came across a very interesting article that talks about gratitude, so I decided to share it with you all

For those feeling dissatisfied with a friend or partner, saying “thank you” may improve your attitude about the relationship, new study findings suggest.

It turns out that expressed gratitude isn’t just good for the recipient. It strengthens the relationship by causing the person expressing thanks to feel more responsible for their partner’s welfare. 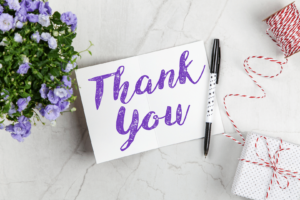 While previous research on gratitude has found that expressions of thanks strengthen a relationship by increasing satisfaction with it, the new research, published online recently in Psychological Science, looked at the effect of expressed gratitude on what psychologists call “communal strength” — the degree of responsibility one partner or friend feel
s for another.

Gratitude, when expressed, boosted that communal strength, according to the study’s lead author, Nathaniel Lambert, a research associate at Florida State University in Tallahassee. The finding makes sense because “when you express gratitude to someone, you are focusing on the good things that person has done for you,” he said. “It makes you see them in a more positive light and helps you to focus in on their good traits.”

Lambert and his research team tested the idea that expressing gratitude helps strengthen relationships in this way by doing three different studies.

In one study group, 137 college students completed a survey regarding how often they expressed gratitude to a friend or partner. Results showed that gratitude was positively linked with the person’s perception of this “communal” strength.

In another study, involving 218 college students, expressing gratitude predicted boosts in the expresser’s perception of the relationship’s strength over time.

In a third study group, 75 men and women were randomly assigned to one of four groups. Over a three-week period, one group expressed gratitude to a friend; another thought grateful thoughts about a friend, while a third thought about daily activities and a fourth had positive interactions with a friend.

Those who expressed gratitude reported more relationship strength at the study’s end than did those in the other groups.

“The person doing the thanking comes to perceive the relationship as more communal, to see the person more worthwhile to sacrifice for, to go the extra mile to help out,” Lambert said.

Although the studies only looked at the people expressing gratitude, Lambert speculated that “those who are being thanked will often feel an urge to reciprocate. They will want to express their gratitude back. It can become kind of an upward spiral.”

A simple “thank you” might be just what a relationship that’s turning sour needs, he said. “In relationships today, often people get mired down into what the person isn’t doing for them. That’s one of the neat things about gratitude. It potentially can change the trajectory from a negative focus to more of a positive outlook on the relationship.”

The new study is “an important extension of previous research,” said Robert Emmons, a professor of psychology at the University of California Davis, a long-time gratitude researcher and author of Thanks!: How the New Science of Gratitude Can Make You Happier.

To his knowledge, Emmons said, “this is the first research study that has examined expressedgratitude in the context of an ongoing, close relationship.”

The researchers have documented an “easy and often overlooked way to strengthen relationships,” he said. “Gratitude does knit together relationships and bind people into networks of reciprocal obligations.”

One weakness of the study, he said, is that the participants were college students, but that is typical of much research. More women
than men participated, and that could affect results, Emmons said. Only 15 of the 75 people in the third study, for instance, were men.

“Studies have shown that men are more ‘gratitude-challenged,'” he added.

Even so, those who want to develop the gratitude habit can do so by becoming “more vocal about gratitude … by expressing it more regularly,” Emmons said. “Even if one does not feel it, research strongly demonstrates that going through the motions can lead to the emotion.”