Please allow me to express my gratitude for this wonderful story! It is one of my favorites! 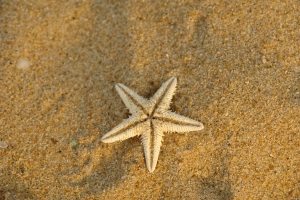 Some time ago, a writer with a long and successful career built a magnificent home on the coast of Oregon. It was his ritual each morning to rise and climb the winding staircase to his studio that faced the beach. There he would sit, gazing out of a huge picture window, silently drawing inspiration from the ever-changing wonder of the sunrise. Enriched by the beauty and serenity, he would then begin to write.

One morning the writer awoke as usual. headed upstairs, and began his quiet meditation. The sun was just coming up and a soft mist hung over the shore. As he gazed out at the beach, he was transfixed by what looked like a mystical dance, far off in the distance. He found himself completely fascinated as he tried to make out what it was; soon he could think of nothing else. After a short time his curiosity overpowered him; he simply had to know what it was. He put on his coat and began to walk down the beach toward the mysterious figure.

As he drew nearer he could see that the ‘dancer’ was a young girl, around eleven or twelve years old. Again and again she bent down to grasp something from the sand, then ran out into the waves. She moved gracefully and purposefully. When the writer drew very close, he realized what she was doing. One by one, she was throwing starfish into the sea.

As the writer looked down the beach, he saw that thousands of these beautiful creatures had been washed up on the shore. He approached the young girl and said, “Good morning.” Quietly she returned his greeting. Then he asked her, “What are you doing?”

As she pointed toward the sunrise, the girl said simply, “The sun is coming up and the tide is going out. If I don’t pick these starfish up and throw them into the water, they’ll die.”

In his wisdom, the old man looked down at the girl and shook his head slowly as she reached for another starfish. “Young lady,” he said, “there are thousands of starfish and just one of you. Don’t you see that you can’t possibly make a difference?”

Briefly, the girl look up into his eyes, then bent over again, grabbed a starfish, and flung it into the sea. As she passed him on her way back up the beach, she stopped for just a moment. With a gentle smile she assured him, “I made a difference for that one.”

Make a difference for someone today.